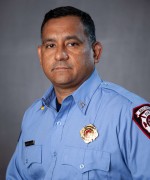 The commitment of this department is to provide the highest level of public services for our citizens, business owners and visitors. We protect lives and property through public education, fire prevention activities, fire suppression, emergency medical services, and emergency management planning.

The original City of Balcones Heights Fire Department, with its twenty-five members, was founded on November 12, 1954, as a volunteer department under the leadership of John Caran. The department’s first fire truck was a surplus Army 300 gpm pumper, which was housed at Schafer’s Garage on Fredericksburg Road, until a new fire station, located at 107 Glenarm, was built with monies raised through fund raising events and public donations in 1955. The volunteer firefighters faithfully served their community until 1967, when eleven fully salaried firefighters were hired to replace the volunteers. In 1974, the original fire station was replaced by the current, four-bay, brick fire station located at 111 Altgelt, the twenty-fifth anniversary of the incorporation of Balcones Heights.

Although the fire station is still located at 111 Altgelt, the equipment and apparatus have changed over the years and have definitely become more modern and up-to-date. There is no doubt if one of those original firefighters were to visit the station today, they would be amazed at how different things are.

Today, the fire station houses two 1250 gpm pumpers, a 100 ft elevating platform, and a 2009 Chevrolet pickup truck that is used as a staff and utility vehicle. There are currently sixteen professional firefighters housed at this fire station. The fire department provides the following services to its citizens, business owners and visitors:

Thomas Marroquin was born in Oahu, Hawaii, where his father was stationed while in the Army. He grew up on San Antonio’s southeast side, and attended Charles C Ball Elementary, Connell Middle School, and is a graduate of the 1996 class at Highlands High School.

Marroquin joined the US Navy and served from 1996-1999 in the Damage Control Division aboard the USS Dwight D. Eisenhower, assigned to maintaining the shipboard firefighting systems. Becoming a firefighter has been a lifelong passion.

Marroquin joined the Balcones Heights Fire Department as a part-time firefighter in 2009; becoming a full-time member in 2010. He was promoted to Lieutenant in 2016, then to Captain in 2021.

He married his high school sweetheart in 1998. Donna is a pharmacist with HEB. They have three boys-Matthew 21, Adam 18, and Seth 16. Marroquin’s hobbies are reading, running, and exercising. He also enjoys spending time with family.