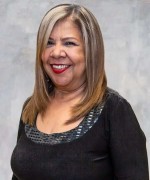 The City Secretary's Office is located in the Balcones Heights Justice Center/City Hall on the second floor.

Code of Ordinances Not Yet Codified

Delia R. Sanchez, formerly Flores, has been with the City of Balcones Heights since May 1994.  She began as a General Clerk working mainly in Municipal Court, then promoted to Finance Clerk, and in 2002 was promoted to the position of City Secretary.  She became certified as a Texas Registered Municipal Clerk in 2007 through the Texas Municipal Clerks Certification Program and was recertified in 2012.

Mrs. Sanchez recently married on August 9, 2016, has two daughters and nine grandchildren.  She is a Texas native, graduated from Thomas Jefferson High School (Go Mustangs!), and has lived in San Antonio her entire life.